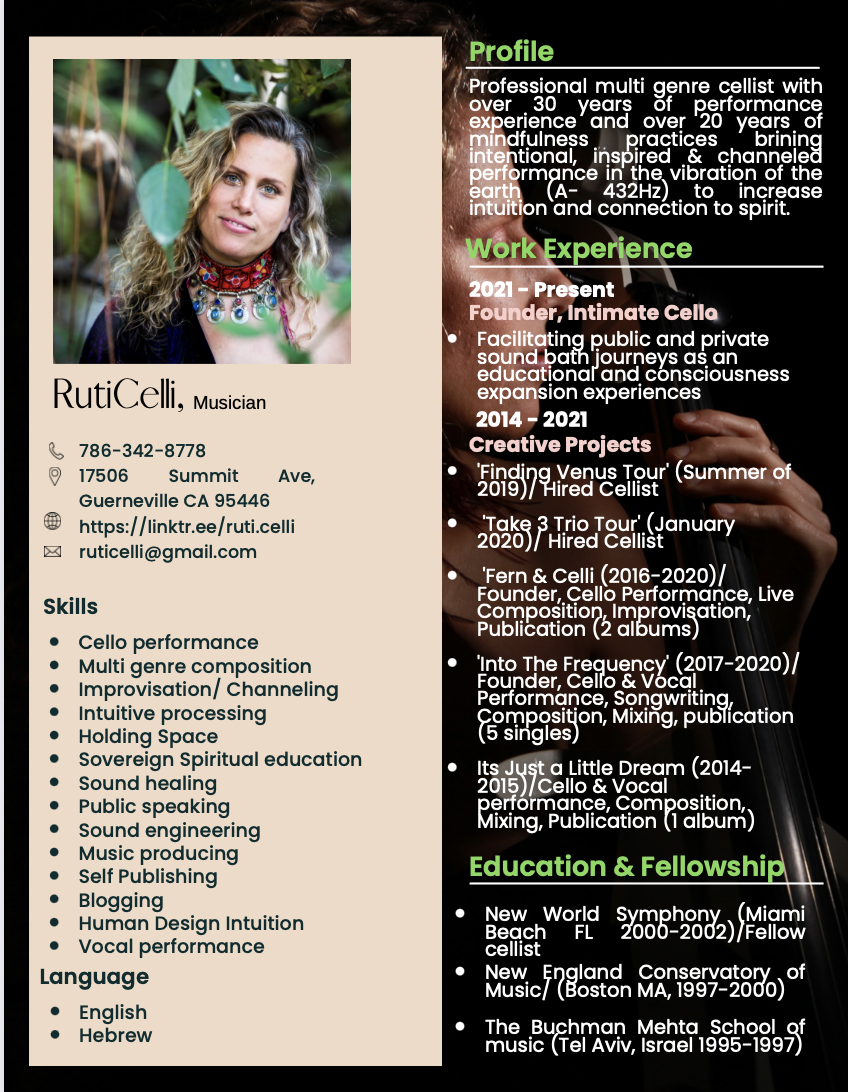 RutiCelli began her musical journey at the age of 8, exploring music education in some of the finest schools in Israel.

With an extensive orchestral & chamber music experience she moved to the US in 1997 to complete her degree in Cello Performance with Prof. Laurence Lesser at the ‘New England conservatory of Music’ (Boston) after which she joined the prestigious ‘New World Symphony Orchestra’ in Miami from 2000-2002.

In the past 16 years Ruti has been involved in the field of music production and composition through live improvisation- developing a unique genre which is a cross between Classical, New Age, Ambient, Acid Jazz, Lounge, Trip hop & Pop music. Her earlier productions include adding her own sultry vocals which led her to independently publish 2 solo albums in 2015: “Nocturnal Miniatures” and, “Its Just a Little Dream” (both performed almost entirely by RutiCelli).

Ruti is currently working on an Improvisational project called ‘Intimate Cello’, where all the material is %100 improvised.

Live improvisation, also known as “the art of presence and trust’” has taken cellist RutiCelli into a courageous journey of exploring how channeling live compositions in the tuning system of A- 432Hz can heal us deeply from within.

From the ambitious journey of a classically trained cellist experiencing the world of performance, Ruti immersed into the world of healing music. Aligning herself with the ‘harmonic intonation of nature’ Ruti expresses the journey of self healing and reflection in her performance.

Ruti appears on more than 40 albums worldwide as a cellist, vocalist and songwriter. Her most recent album, “Deja Vu” was released October 19th, 2022.

In her spiritual evolution RutiCelli connects to her instrument as a channel for the divine. She facilitates ‘Intimate Cello Sound Baths’ with the intention of creating a deeper connection with her audience.

Ruti creates intentional containers of sacred space with her audience to experience the magic of vibrational expansion, and how it can help our collective & individual healing at this time.

Ruti’s gift for composing music on the spot accompanied by her choice to tune her instrument to A-432Hz is intended to present Intimate Cello as a “Right Brain Art”, activating imagination, creativity & a deeper intuition within her audience.

Ruti’s current production project involves the release of 6 ‘Healing Albums’ in the vibration of A-432Hz, which she offers as a tool for evolutionary growth. A new way of exploring the connection between our right brain powers and our inner growth journey.

Performer and participant at the Schleswig Holstein Music Festival, Salzau, Germany (since 2000)

Performer & participant at the London Masterclasses (with Mr. ralph kirshbaum), London, England (since 2000)

Performer and participant at The Holland Music Sessions, Amsterdam, Holland (since 2000)

Performer and participant at the Radolfzell Music Festival with Prof Uzi Wiesel, Radolfzell, Germany (since 2000)

Performer & participant at The Banff Center for the Arts, Art summer programs, Alberta, Canada (since 1998)

Performer and participant at The Boston University Tanglewood Institute, Lenox, MA (since 1997)

Principal Cellist of the Young Israel Philharmonic Orchestra at the Verbier Festival, Verbier, Swiss since 1994)

Karin Michaels (flutist & songwriter)- I composed, produced and performed (Cello & Vocals) on the single “Must Be Your Magic” to Karin’s lyric (2016)

Singer/ Songwriter Jim Camacho– “Alive” Single, to be published in the winter of 2017.

Dave Schulz (keyboardist & co-composer). Collaborated as a member of “Into The Frequency”, a Trip Hop Electronica duo (2017- 2020)

To leave a message 🙂